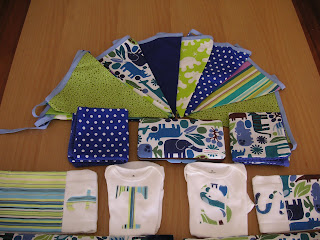 So my new years resolution for 2010 was going to be that I was going to take it easy and do less, HA! Not! This month has been pure madness, I've just been so busy with crafting I haven't sat down for even a second. I've just completed this lovely parcel to be posted to my nephews in the UK, not everything was made by me (just did not have the time) but most were. I sourced a few items from Etsy (esp the monogrammed items) and ordered some extra 2D zoo blue fabric and zipped up a few items to match. 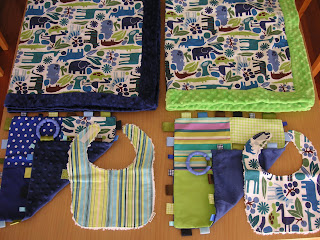 I've also completed 2 playmats (quilted) and some bunting for 3 other babies born this month but photo's will follow after the mum's have received their gifts ;-) 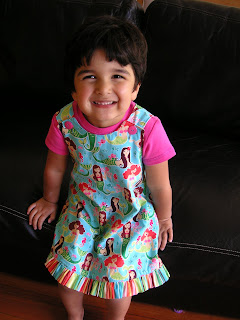 Then it was on to Imara's items, I made this super cute dress for her to wear at a recent group/combined 3yr old party. The fabric is Sea beauties and Malibu stripe by Michael Miller. I also made a matching skirt + T-shirt which she will wear on her actual birthday, pictures to follow. 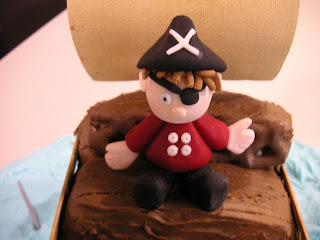 This is a pirate ship I made for our mother's group combined birthday party on the 17th January. I made the fondant figure a week in advance to let it dry properly, but since we had 40+ degree heat it was fun and games trying to shape the figure without it going mushy. 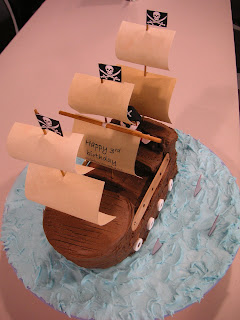 The actual ship was the hardest part of the whole cake. Since I made a dairy free chocolate cake it became a complete PITA to shape and ice. I ended up stuffing the cake in the freezer for a few hours before shaping it very quickly with a serated knife, I then iced the cake twice to make it look a bit smoother and to hide the fact the darn thing was breaking apart. In the end when I added the royal icing water and fondant shark fins and paper sails the cake didn't look too bad, phew! Next time I will make it from mudcake which is what I usally make when I do novelty cakes.