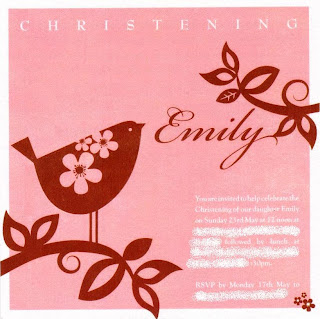 This is what I have been working on the past 2 weeks, its a Christening cake and cupcake set for a friend's little girl being Christened today. The theme was birds and owls with the invite being pink and chocolate brown (a bit hard to see in the scanned pic above). The main cake was for immediate family only so I baked a 6'inch triple decker white mudcake, filled with vanilla buttercream and covered in white chocolate fondant. I then stippled the whole cake with pink royal icing to give it a rough textured look. The main owl, branches flowers and writing is also made from white choc fondant then the flowers and letters were brushed with pearl lustre dust to give it a shine. The side and back of the cake had various birds in different patterns prancing around. The cupcake stand is custom made using pink and brown fabric from Spotlight while the supports (not visible on the photo) was covered in fabric called "Birdie" by Moda 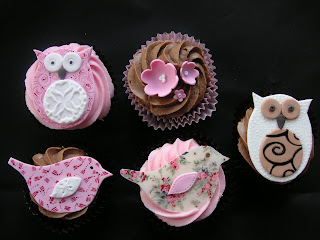 The 70 cupcakes were 50% chocolate mud with double chocolate buttercream icing and the other 50% white chocolate mud cupcakes covered in pink vanilla buttercream. I then handcut 23 birds and 23 owls (my cutters arrived too late in the post, so had to be handcut) and either gave them a texture (using my texture mats) or handpainted them using edible food colours. I also tried out an edible print sheet on white chocolate for the white birds (experimenting for my next project ;-))
I am extremely happy with how they all turned out, it looked stunning once all assembled and I loved doing this project. Most nerve wracking moment was when I had trouble covering the cake in white choc fondant, I just wasn't fast enough to get the creases out before the paste kept drying, after 5 attempts I managed to get it done. After a strong vodka and a chat to my cake teacher I found out that tall narrow cakes are the most difficult cakes to cover, even for the expert cake decorater (which I am most certainly not!) and that only practice will make me better at it.
Posted by Leoni at 10:41 AM 7 comments:

What a busy week! 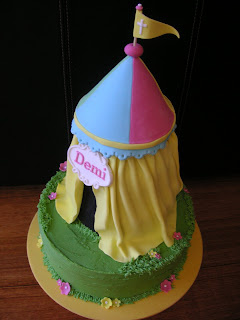 Jumping jelly fish but what a busy week! I've just completed this lovely Baptism cake and matching cupcake tower last night. The theme is circus clown (incase you couldn't tell lol) but in girly colours rather than the bright red, blue and green of the traditional circus. The cake consists of a double decker 10' Cadbury milkchoc mudcake as the base, with the "tent" made from a 6', 5' and 4' mudcakes. The cake was filled with Cadbury choc buttercream icing and covered in fondant (the tent part). I had so much fun making it and a few nervous moments when things did not go to plan. The cake was based on Debbie Brown's Knight in Armour tent from her Enchanting magical cakes book, the only trouble I had was with the tent roof (in the end I made a carboard template and made the roof from modelling paste, after drying I added it to the tent) and the fabric that makes up the walls of the tent. Debbie said to roll out the fondant quite thick and then add it as one piece to the cake, I found this a) added unnecessary extra weight to the cake and b) made the fabric look quite artificial, not nice and flowing. In the end I rolled the paste out nice and thin and added the fabric in sections, seams nicely hidden and added a Garrett frill border to hide the join to the cake. 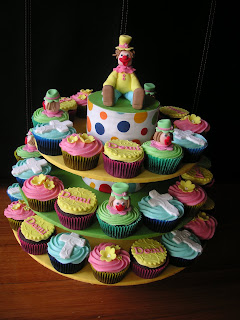 For the cupcake tower I had to make 80 (yes 80!!!) chocolate sponge cupcakes topped with vanilla buttercream and 4 different toppers. The recipe used was from the Crabapple Cupcake bakery book, yummmmmm. 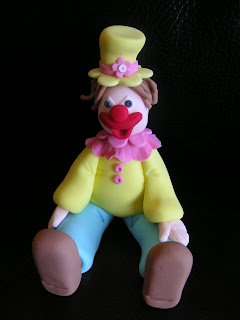 Here's the clown modelling paste keepsake I made, initially he was meant to go with the cake, but in the end it looked too "busy" so I decided he would look better on his own on the cupcake tower. He certainly was big enough to feature as the main topper on the tower. 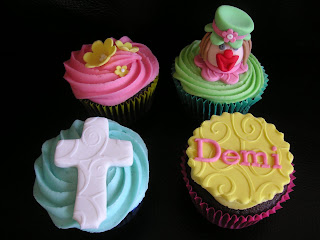 Here's a close up view of the 4 different designs I did for the cupcakes. I loved doing the clown heads the best, since I had to do 20 of them they all looked the same but had different expressions which I quite liked.