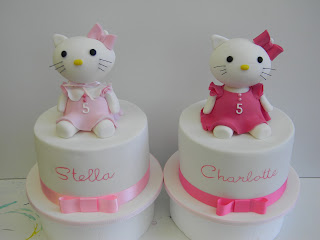 I loved making these two twin Hello Kitty cakes for two sweet little girls. One cake was vanilla buttercake and the other cake was Choc mud. I used edible textas to write the names on the cake using a homemade stencil. The figurines were made from styro and fondant so they were not only sturdy but light.
﻿
﻿ 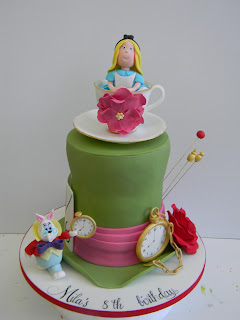 Mad Hatter tea party cake for one of my daughter's best friends. The design was "open" and I could basically make whatever I wanted as long as it was Alice in Wonderland related. Everything made from sugar and 100% edible, except for the florist wire posing as "hat pins" The tea cup and pocket watch took the longest as I had to make them in stages :-)
Inspired by Christopher Garrens Cakes, Lisa's cakes and Arte da Ka 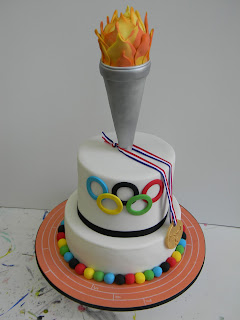 This last cake was created for a 5 year old boy whom loved the Olympics. I was asked to make something simple that featured the Olympic flame, running track and had a gold medal. This inspiration came from  Nicole Patrick's Confections, Cakes & Creations as she made a similar cake on her Blog page. Cake flavour was raspberry buttercake with raspberry compote frosting.