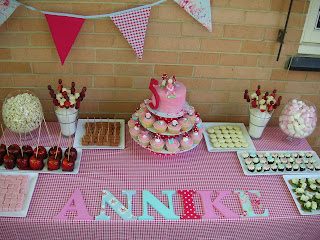 This weekend we had Annike's 5th birthday BBQ picnic party, lucky for us it was a clear and sunny 30 degree day. My inspiration was Amy Atlas, I love her tablescapes, this lady is so talented. Originally the table would have butted up against my lovely old and rustic timber shed but since it was going to be so hot it was moved against this ugly wall and I had no time to come up with a way to hide the wall in the background :-(
Food included homemade toffee apples, mini cheesecakes, mini cupcakes, coconut ice, popcorn, mint slice and various other nibblies. The letters that spell out Annike's name is MDF painted and covered in Tanya Whelan fabric from her Darla range. 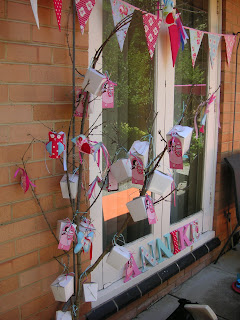 For the party I made 5 lots of flag bunting which was suspended across the garden and around the outside of the house. Once again fabric by Tanya Whelan from her Darla range. I popped an old branch in a pot with sand and hung fabric (Darla fabric) and felt plushies as decoration along with the party loot boxes for guests to take home. Its a neat way to display party favours and serves as a cute decoration. 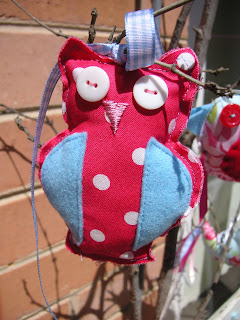 Close up of one of the plushies, I roughly put them together with the seams on the outside in keeping with the rustic casual look. Now that the party is finished I am going to convert the plushies into a baby cot mobile as a gift, but that will be elaborated on in my next blog post. ;-) 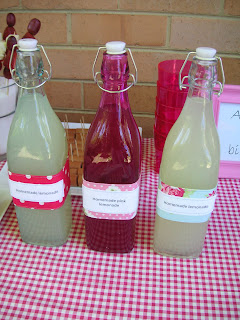 I also made homemade lemonade which I popped in these cute vintage bottles with homemade lables (fabric Tanya Whelan, even the tablecloth is from her Darla range!).
Lemonade
1 x cup of sugar
1 x cup of water
1 x cup of lemon juice
5 x cups of icy cold water
Pop 1 cup of sugar and 1 cup of water in a pot and stir occasionally on low heat till sugar has completely dissolved. Add cup of lemon juice and about 5 cups of ice cold water to make up your lemonade. Yum 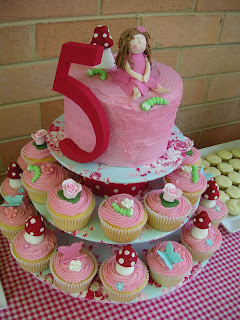 And here is the cake!!! I am happy with how the cake turned out I must say, as there were a few issues in the end. Main cake is double layer Maidera cake with cherry butter cream icing, while the cupcakes were plain butter vanilla sponge topped with cherry icing. (very yummy)
Cake was meant to be topped with a blue fairy (my very 1st human figure!!), but since I forgot to pop a toothpick in her while making her (doh!) she slid off in the final stages the night before the party (double doh!!). All the cake and cupcake toppers were made over a 4 week period and stored away till decorating time. We had toadstools, worms, roses, flowers and butterflies. Cake stand was made from 3 x MDF cakeboards in various sizes and foam cake dummies all covered in Tanya Whelan Darla fabric. 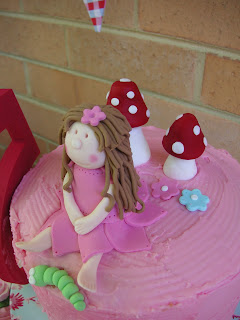 As I said it was meant to be a fairy, but I forgot to make the wings FIRST, which were meant to be attached to the body while the body was still wet and BEFORE the hair goes on lol So this fairy has no wings. I also struggled with the arms and legs when I made my trail fairies, after about 6 attempts I finally was happy enough with the two faires I chose, one for the cake and one for backup. For the hair I used a clay extruder with a hole disc and just pushed out a few lots of "hair" which I attached with some water after the head had dried. I have learnt while making humans you have to do it all in bits and make sure each part you've created is very dry and hard before you go on to the next part. I made the body and legs 1st, let that dry before attaching the arms and head, then created the dress and lastly the hair. 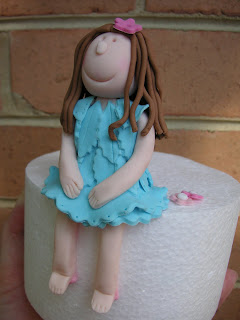 Excuse the icing on this fairies feet, this is the culprit that slid off the cake! I liked her better as she was more naturally posed and blue to contrast with the pink of the cake, alas it wasn't meant to be. If I get time I might put a fairy tutorial together shortly, so watch this space.